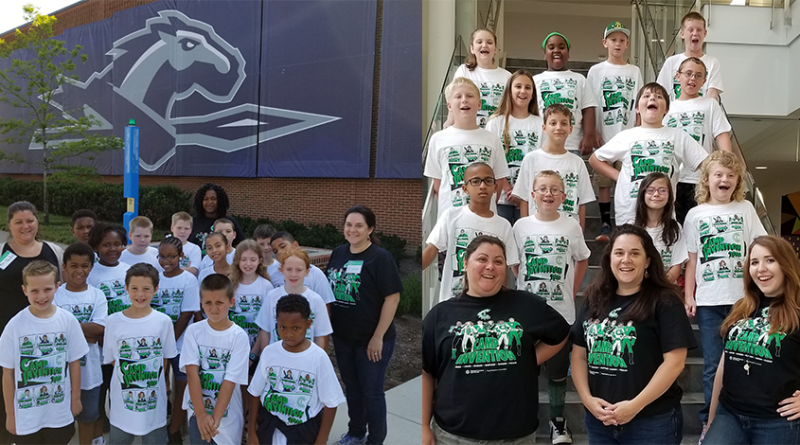 This summer, ITTIP staff hosted two, one-week Camp Invention learning experiences for elementary students.  The first week of the camp, July 23-27, 2018, included students entering 3rd or 4th grade. The second week of the camp, July 30 – August 3, 2018, included students entering 5th or 6th grade. While the curriculum was the same for both camps, delivery was modified based on the needs of the participating students.

The students worked through four different modules throughout the week, each one focusing on a different content and design challenges. The first module included taking the role of a veterinarian to examine the anatomy of a robotic dog in relationship to a real dog and to diagnose pet illnesses through science investigations.  Students “adopted” one of the robotic dogs and their new pets got to go home with them, after adding fur and accessories to their pets during the week. A culminating activity included the building and celebration of a dog park for all their furry friends!

A second module included the exploration of sensors and how they are used, or could be used, in the real world. Students explored and invented how sensors could be used in clothing, vehicles of the future, and even for underwater exploration and fire fighting!   One invention had students creating a vehicle of the future where they had to test their collaboratively made vehicles for safety with sensors from a Crash Test Dummy. Students also enjoyed decorating and taking home their very own light sensing Optibot.

Students had their design abilities challenged as they explored the internet of things while they built and decorated their own mini-mansions in the third module.  They learned about and integrated renewable energy sources, as well as smart devices as they blinged out their mansions. A culminating activity included “house warming” parties as the students shared their “new” houses. The last module in the Camp Invention curriculum included “mini challenges” that had students thinking about themselves as inventors while they explored other inventors and entrepreneurs throughout the week.  By the end of the week, students learned how they could take their own ideas, keep those ideas safe, and become inventors themselves! Camp participants also enjoyed keeping notes and ideas in their own Inventor Logs throughout the week for all of the activities. Susan Throckmorton, ITTIP Office Manager, and Barbara Scott, Logistics Coordinator, were a huge help in the success of the programs, as they were on campus most of the time assisting the lead teachers.

Camp attendees included students from the following local school divisions: Appomattox, Buckingham, Charlotte, Cumberland, Nottoway, and Prince Edward County. The camps were supported by ITTIP at Longwood University and were provided at no cost to the participants. Registration information was sent to schools in early May and closed a couple weeks later with an extensive waitlist. ITTIP looks forward to hosting more camps next year, so be on the look-out for registration next Spring!