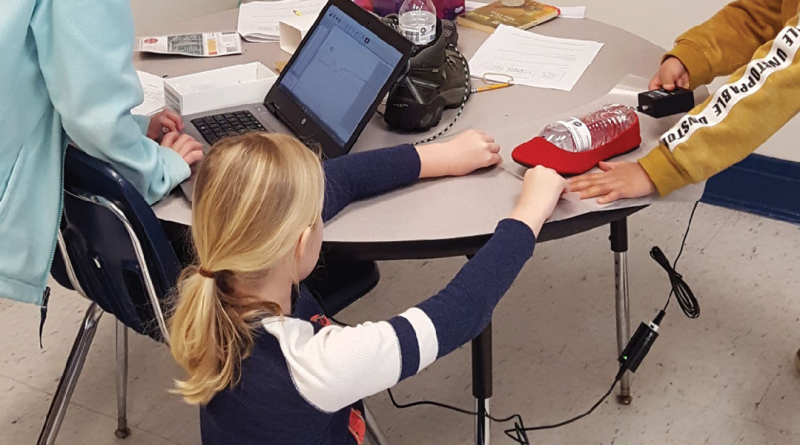 During a learning unit on moving objects, fourth graders at Dinwiddie Elementary school got to put science to the test while experimenting with friction. Students where challenged to work in small groups to study friction on a surface (i.e. sandpaper, wax paper) with different types of shoes to help determine the best shoe sole for certain situations. First, students collected three shoes and used filled water bottles to adjust the weight of the shoes to be equivalent before testing them on a surface. Next, students used probeware to measure the force it took to pull each shoe across the surface.

Learning about friction did not stop there, as the students were challenged to think about other ways that surfaces interact with each other to create a lot of friction or a little bit of friction, and situations where friction is good and bad (e.g. sand on an icy road, wax on a surfboard). This learning was then explored through the work of Material Engineers.  Students learned about people like William Bowerman, Nike shoes original innovator , and Bill and Vieve Gore, the innovators of Gore -tex. A culminating activity connected friction to engineering through a video conference call with an actual Materials Engineer! The students got to ask questions to Monikka Mann out of Houston, Texas, where the conversations expanded into the friction created from the slime of a snail, to how air can cause friction called, drag. Mann reminded the students that they too could become a materials engineer with materials that don’t even exist just yet.